When it comes to describing what Sniper Marketing is all about Blezoo probably summed it up best in 2010 when in a blogpost the marketing company wrote:

Here is an interpretation for Shotgun marketing: “We’re not sure of exactly what we’re doing, so let’s just throw something together that casts a wide net so we can start peppering the field will pellets. We’ll assess what it all means and come up with a better plan afterwards.” Pros: wide net, cheaper, quick. Cons: unintended collateral damage, high miss ratio.

Here is an interpretation for Sniper marketing: “Let’s take the time to understand who our target is, spend the resources to verify the location of the target, send in a reconnaissance team and make sure we hit them with a precise shot because we may only have one chance.” Pros: accuracy, perceived and actual sophistication. Cons: costs more time & money.

In 2010 that statement and approach were well ahead of their time (though in retrospect we could argue it was all obvious and inevitable), today however it is a no-brainer. To examine that statement we need to step outside the obvious connection of me as the writer of The Sniper Mind and consider its writing as the culmination of a host of external events and developments that brought it about.

The distinction is a significant one. A writer could, at a stretch, decide to write whatever he puts his mind to, but a book whose time has come to be written is an entirely different proposition and, as such, answers to a different set of laws.

It’s a brand new century. The 20th century took us from an agrarian society subject to the vagaries of nature and controlled by the flow of the seasons to a highly industrialized, technological society capable of achieving massive economies of scale and running production processes 24/7. In the process we saw the wisdom of marketing in a one-to-many model that required large numbers of prospects in order to turn the relatively small percentage of conversions into profit.

Yet from the 80s onwards a small transformation started taking place in the way consumers reacted to advertising. The average American consumer was exposed to an estimated 3600 selling messages per day in 1996, compared to 1500 in 1984 (Jhally, 1998). Advertising works extremely hard to capture our attention and manipulate (to some extent) our emotions. As a result it becomes hard to ignore. So our brain is forced to process it.

It is the need to process information (and advertising is information) that actually becomes advertising’s undoing. To better understand why imagine a hypothetical desert where, at its very center resides a massive billboard. This billboard commands attention and even becomes a landmark because there is nothing else around it for several hundred miles. Starved of information the brain latches onto it. We pay our fullest attention possible to whatever message the billboard shows us.

Populate that hypothetical desert however with a hundred million billboards and something different happens. The brain, suddenly faced with messages that exceed its information-processing capacity, needs to protect itself and guard its resources. It develops advertising-avoidance strategies that allow it to navigate the desert landscape with its massive number of billboards without becoming overloaded or drained of mental resources. This is what we, in the digital space, call “banner blindness” and ad-avoidance behavior.

This also perfectly explains the challenge faced by marketing and branding and why they are being forced to change the traditional approach of filling the hypothetical mental desert we inhabit with traditional billboard ads.

This doesn’t mean that advertising doesn’t work. Attention is expensive because it consumes mental resources and, in addition, guides the brain in what it considers important. What the brain considers important becomes prioritized. Anything that fails to pass through the mental filter of what is necessary or important is considered to be mentally invasive and manipulative. Today’s consumers are highly adept at managing their emotional responses to advertising through the deployment of embodied resistance to persuasion in advertising.

Precisely because we do not live in a desert our brain seeks out information to process to help it navigate the landscape of modern life. Despite the fragmentation of self and identity “the postmodern self willingly incorporates marketers’ meticulously constructed consumer self into his or her psychic space and self-image.”

In this new, meticulous and highly selective synthesis of culture and self that creates the postmodernist identity of today’s consumers the messages that resonate are authentic, personalized, transformative and highly relevant.

Marketers, brand managers and advertisers face a problem that isn’t new. The military first faced it in the Vietnam war: overwhelming fire power does not necessarily deliver victory.

In the marketing context “fire power” is translated into advertising and marketing that command attention and “victory” delivers increased sales and market share. When your target has learned how to successfully resist your efforts, be they designed to kill him or persuade him to buy your stuff, simply throwing more of the same at him is not going to have any effect.

The military analogy is more than just a dramatic affectation. In his book, On Killing: The Psychological Cost of Learning to Kill in War and Society, US Army Colonel Dave Grossman discusses how in WW1 for every combat casualty there were around 10,000 rounds fired. By WW2 this figure had risen to about 25,000 rounds. In Vietnam it was about 50,000 rounds.

A General Accounting Office (GAO) report from the Department of Defense cites how the U.S. Army has fired 250,000 rounds for every insurgent killed in Afghanistan. Compare this to the 1.39 rounds per kill ratio snipers have been averaging since Vietnam.

The direct lesson is that doing more of the same increases the cost without increasing the returns. To combat this the army has, of course, started making better use of trained snipers. Its new approach hasn’t stopped there. In direct recognition of the fact that unless you correctly identify the pain points of the population you’re dealing with you cannot hope to fight a war and win it has developed a detailed, meticulous relationship-building program. The army regards this as the “human terrain” it needs to successfully navigate when pursuing a war.

In combat, as in marketing, the scatter-gun, heavy-duty approach of the past is giving way to a new, economical, highly targeted, intentional way of operating where the skillset of the sniper is used not just in waging war but in collecting data, analyzing it, categorizing it and gaining a deeper perspective of the picture that takes shape. The sniper mindset revolves around ten distinct modalities that characterize it. They are identical when it comes to sniper marketing.

What Are The Ten Modalities of Sniper Marketing?

A modern marketer, just like a sniper, employs specific actions to help him or her make better decisions. 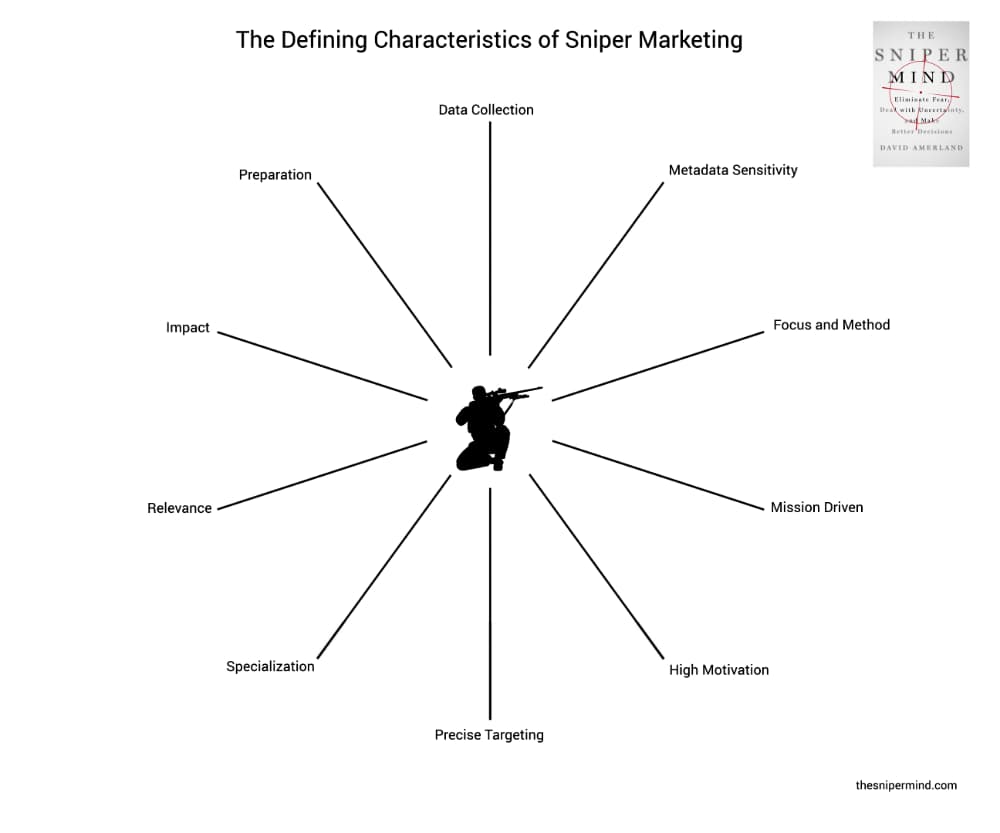 The ten modalities that comprise the sniper marketing mindset are complementary. Each leads naturally to the next in an overlap that helps synthesize a greater whole than the sum of its parts alone:

Marketing has been changing for some time. Some of us have been trying out new behaviors, adapting to the new dynamic of marketing that is emerging. The time has come to formalize the approach, establish the framework necessary to deliver real value and affect real change.