How The External World Maps To The Internal

As an example, we all know that when the sun is shining we feel better about ourselves, are more hopeful about the world and more inclined to make purchases because we feel better about the future. A 2010 study that appeared in the Journal of Retailing and Consumer Services on how sunny weather improves people’s mood and makes them spend more money[1] provided a scientific, theoretical framework that helps explain what we intuitively know from our own personal experience.

The outside world we perceive is made of data. Specific facts, events, moments and actions (and yes, that includes the weather) are captured by our sensorium and processed. This activates our neurobiological profile which leads to emotional and cognitive processes in our brain that, eventually, resolve into physical actions that become our behavior. (For a deeper understanding of enactive cognition and how we think, follow the link).

The internal world, then, is made of neural activity. Strictly speaking this is also data but since we cannot easily see, never mind perceive, what goes on inside each person’s head we are only left with those of their actions that are visible to us to help us understand them. To understand a person’s actions and motivations there has to be a way to map them onto the external world. If we can’t do that we have no means of predicting their behavior which then means we also have no reason to trust them and no way to communicate with them.

Trust and communication require a common, agreed, framework of interaction that has a basis on the external, accepted reality. Lacking that framework we are into Arrival territory where the framework has to be created. (The film is good. If you haven’t seen it, enjoy the trailer).

So how does the ‘Outside’ map to the ‘Inside’?

The data of the outside world is governed by the 4Vs of Big Data and Semantic Search that are: Volume, Velocity, Variety and Veracity.

It’s useful to have a quick crash course on them: The Volume of data on a specific event, subject, person means something in itself. The Velocity at which it spreads, is amplified and mutates is also a signal on the importance and quality of the initial data. The mutations and the rise of tangential, related aspects and interpretations of data they give rise to (which is what is constituted by Variety) carry their own significance. ‘Significance’ is equated to the sheer numbers of those engaged in activities of creating, sharing, discussing, interpreting and propagating data and their relative authority in relation to the data they discuss.

Funnily enough the last of the 4Vs: Veracity, is the one that is the most problematic and needs to be solved for first, a fact made clear in my quick lessons on how semantic search works.

The internal world’s 4Ms are made up of Mind, Meaning, Morals and Modality. With the exception of the last one, perhaps, the other three appear to be highly subjective which, logically would make them hard to map onto the objective reality of the external world. Notice, I say only “appear” to be, because in truth they also can be defined with some precision even if their qualitative values are subjective. 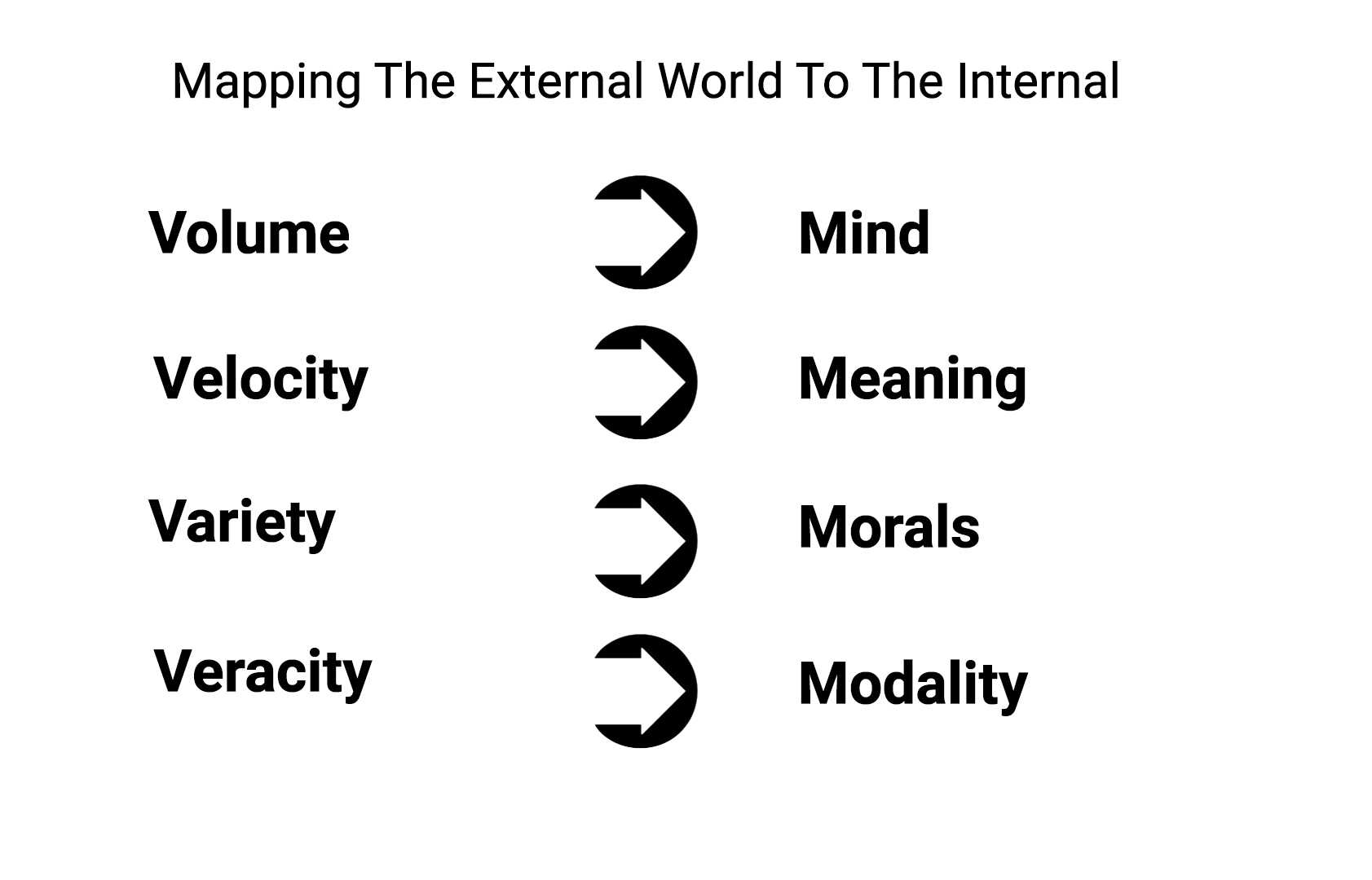 So, Mind, according to the Theory of Mind is the process through which the brain discovers the world by “creating representational states which are then structured according to observed similarities from which is deduced a latent (or unobservable) cause.”

Meaning, is the designation ascribed by the brain to the collection of external events it has processed and their causes. Mapping it to Velocity makes sense in that data that has Volume but fails to acquire Velocity is inert and of no relative importance hence without wider contextual meaning to the observer.

Morality (and morals) are the result of behavior and behavior gives rise to culture so it is entirely within this logical framework to suggest that morality is derivative of culture. Does Morality map to the Variety vector of Big Data? Human behavior is governed by choices that are informed by social decision-making[2]. Variety in data, its mutation, interpretation, re-invention, re-purposing and so on are also governed by human perception of its impact in a wider social setting. The decision-making behind such activity is not dissimilar to the decision-making behind purely moral choices though the context may be different.

Modality is the all-encompassing term we apply for the brain’s (and body’s) express behavior in response to a factual and logically sound experience or perception. Mapping this to the Veracity vector of Big Data requires the assumption that we wouldn’t react to data that is perceptually untrue.

Reconciling the “placement problem” of the 4Ms within the broader framework of orthodox naturalism is Jack Reynolds of Deakin University whose paper on the subject was published just this year.[3] In a broader context we know that trained snipers use metadata the way a search engine does. There is a broad and deep correlation of the four vectors of Big Data that typify our external world with the four attributes that mark our internal one 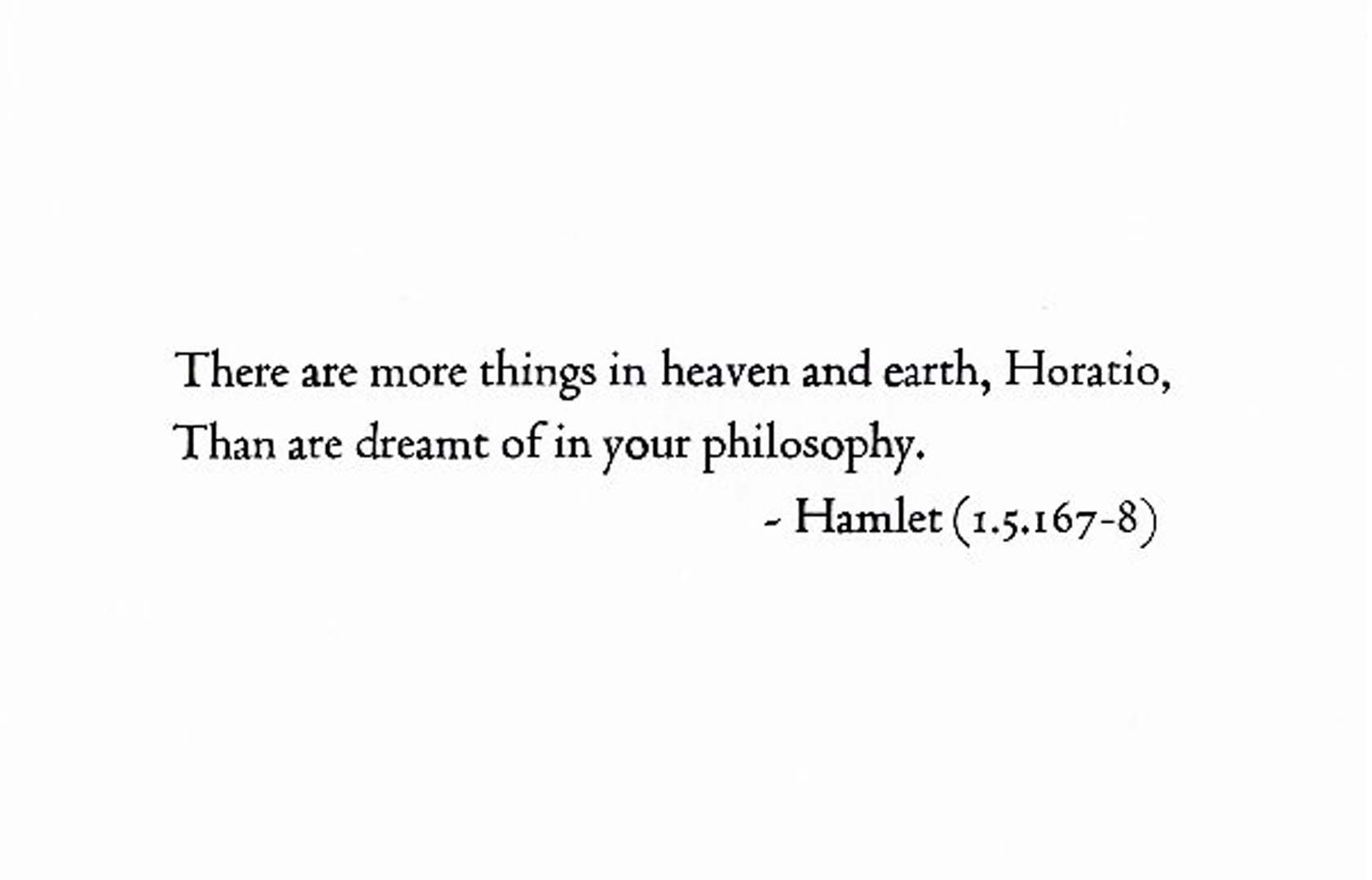 It’s a start. In order to get to a better understanding of the brain, mind, behavior and motivation we need to understand the impact the external world has on us.