Traditionally, of course, readers find books. And though maybe things can work the other way around; when that happens it’s usually in the movies and it involves some kind of spell at the very least.

So, when a book finds a reader in real life, the journey is always of interest. Writers get to see the path their creation takes before it reaches its audience and readers begin to realize the inherent value of opening themselves to the possibility raised by a book they might not have usually read.

The Sniper Mind was not an easy book to write. For a start it took three years to research which in itself was a pretty deep dive. Then the journey itself would never have been possible without the help from many other people I encountered along the way.

Then there is the book itself. From my choice of its title to the crossover into a subject that perceptually, at least, lies outside my usual focus on search, social media and marketing it’s a book that’s set itself some pretty hefty challenges that need to be met in order to get to its readers.

The readers of The Sniper Mind are practically everyone. While it is primarily a business book that bridges the gap between the battlefield and the boardroom it’s also a book that teaches how to develop self-awareness, self-control and critical thinking and apply it all in everyday life as well as in business.

If that sounds like it makes its marketing just a little bit harder it’s because it does. Yet a book that hits the mark, inevitably resonates with readers and they become an integrated part of the marketing that drives it. To better understand the pieces that must fall together I will use a real life example that came to my attention.

Getting a reader in Australia, for the The Sniper Mind, is an incredibly difficult thing to do. Australia is, relatively speaking, a small market which makes it secondary. It is remote. Capturing the attention of a reader there requires either for The Sniper Mind to become the global hit book that everyone is talking about in which case it inevitably captures the attention of the Australian audience or for either my publisher or me (the author) to have an “in” to the Australian market that commands media attention and leads to capturing target audience attention.

None of these paths are cheap. They require time and effort to achieve which means they also cost money and while my publisher (St. Martin’s Press) did spend money on marketing that budget was not bottomless and the return on investment (ROI) calculations always weighed against anything but mainstream markets with a proven record of sales.

Despite that The Sniper Mind is riding high on Amazon’s Australian website and judging by some of the emails I have been getting Australian readers are finding it. 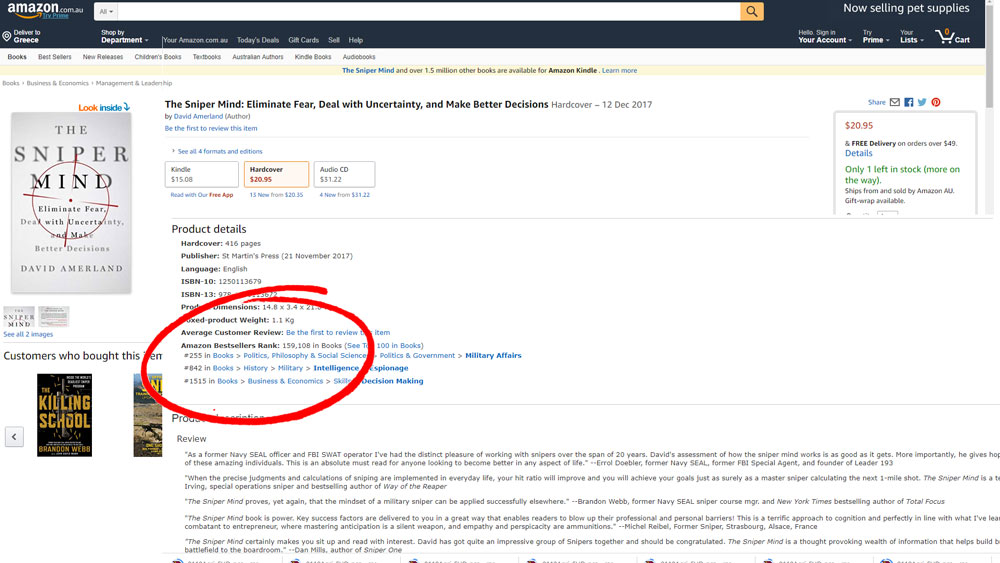 At the beginning of the year I agreed the sale of the Chinese Language Rights. China is a massive market but the level of difficulty to crack it for an English-speaking writer is right up there with a successful moon landing for a crop-dusting plane pilot. As a matter of fact the crop-duster pilot might actually have more of a chance.

Australia has a fairly significant portion of native Chinese speakers in its population. One of those Chinese speakers turned out to have a copy of the Chinese edition of The Sniper Mind and she regularly translated snippets from that and shared them with her English-speaking friends. One of those friends was intrigued enough by it to order a copy in English.

So, things went from me writing the book in English, to my agreeing for the translation in Chinese to an Australian English speaker finding it through translated posts a Chinese friend of hers posted on the web.

Is there a lesson in all this? Well, sure, if any Australian journalist comes across this, hit me up because as it happens I am Australian too, though I’ve been away now for quite some time. A little more seriously? A writer’s one job (my one job) is to make the book’s content come to life in the reader’s mind. This, done well, delivers on the promise made by a book to not waste the reader’s time, attention and money. That alone then circumvents the obstacles posed by marketing budgets, geographic considerations, language barriers, time zones, market size and press access.